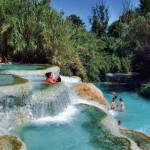 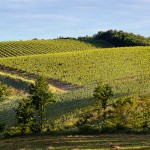 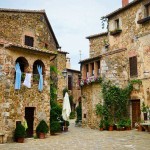 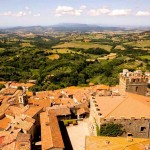 The Sienese lion with an open paw is the emblem of Manciano, and is meant to symbolize the hospitality of the people. Manciano covers a vast territory which extends into the southern part of the province of Grosseto, in the middle of the Maremma. As the provincial capital Manciano is located on a privileged position: high on a hill, an ideal vantage point for a strategic lookout, with a view that spans from the sea to the mountains. Its a fertile land with dense bush and green canopies; surely it would have made the perfect hideout for fierce brigands during ancient battles.

Montemerano, a few kilometers from the capital, is one of the most beautiful towns in Italy and is known as a medieval jewel among the olive groves. Nearby Saturnia, named “one of the oldest cities in Italy”, is famous for the precious thermal waters that flow at a temperature of 37.5°C (99.5 F) and are considered among the most beneficial thermal waters in the world. The hilly territory crossed by the Albegna and the Fiora rivers is green and untouched and smaller villages, such as San Martino sul Fiora, le Capanne, Poggio Murella, and Marsiliana make it the ideal place for lovers of nature and history.