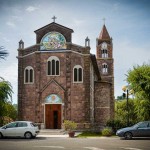 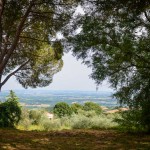 San Martino sul Fiora sits on an isolated hill overlooking the wide valley of the river Fiora. It began as a farmhouse in order to recover lands surrounding Sovana, as a result of the measures taken by Siena in the 16th century. On right side of the town square, the oldest settlement clusters are still clearly visible. In 1651, during the refeudalization programs undetaken across the Maremma countryside by the Medici, the territory of San Martino was granted by the Grand Duke Ferdinando II de Medici to Pier Francesco del Monte Santa Maria. Under the Grand Duke of Lorraine estate holdings, including that of San Martino, were abolished. In 1929 it became part of the City of Manciano and renamed San Martino on Fiora

This area affords wonderful views of the surrounding territory, which ranges from Amiata to the sea.