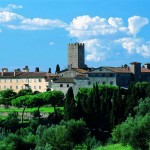 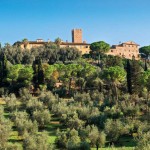 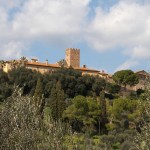 Once the ancient Etruscan Caletra and a capital of the Albegna valley, Marsiliana has been inhabited since the late Bronze Age (11th century BC) and was a thriving center during the Etruscan era (late 8-9th century BC) as the vast burial grounds spread around the castle (discovered in 1908) hill demonstrate. Reoccupied in the medieval era only after the fall of Siena, Marsiliana was unincorporated from the Presidi and donated to the Medici. Grand Duke Cosimo I eventually ceded the city at the end of the eighteenth century to Prince Corsini. The castle, documented since the 13th century, was completely renovated in the 19th century. The high tower overlooking the fortress was built only in 1901.

The Marsiliana latifundium became a farm where shepherds and cowherds grazed and as such the land was partly converted to pasture and partly used for sowing. The farm house, home of the Corsini family, was rebuilt and given the appearance of a castle, just as a village was beginning to grow near Dispensa. When land reform was enforced in 1951, 7,000 hectares of land was expropraited and allocated; the change in the landscape was sharp, and profound.

Tenuta Marsiliana now covers nearly three thousand hectares, including forests, roads, springs, fields, olive groves and vineyards. It is an untamed and rural area that also extends over time as much as space punctuated by the Etruscan ruins and traces left behind.

Visitors can also check out the Farm Museum, which chronicles the life of farmers through objects, tools, and instruments that made up daily life until the mid-fifties. The museum immerses visitors in the rural life of the nineteenth century with displays of room furnishings, used clothing and work tools.

The Farm Museum is a project of the Corsini family and can be visited by contacting the farm directly.