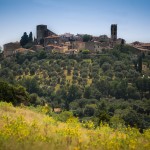 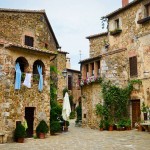 Montemerano is a lovely medieval village on a hill between Manciano and Saturnia, with a historic heart shaped town center that has remained nearly intact. Strolling through the streets of the charming village, you’ll breathe ancient perfumes and authentic traditions.

The village likely existed in the 9th-10th centuries and was the property of the Amiatino Monastery of San Salvatore; at that time there was only the upper part of the village, however, with the castle not yet built. Around 1000 AD it was under the control of the Aldobrandeschi, who fortified it with walls and castrum and governed the town through their vassals. Gemma Aldobrandeschi, probably the daughter of Guglielmo, “Il Gran Tosco” Dante, was married to Ugolino dei Baschi. Among the most important personalities of this family was Neri, who reinforced the defensive structures of the country and made it one of the most important centers between Sovana and the sea. However the Baschi fortune did not last long and continuing wars brought the family into debt, so in 1382 Count Ranieri sold his landholdings to Siena and Montemerano became a private city. Siena “gave” the Tuscan village priceless works of art (on display in the church of St. George), built new walls and made it the seat of a vicariate. In 1556 Montemerano along with all the other Sienese land passed to the dominion of the Medici and became part of the Captaincy of Sovana. In 1738 all of the Grand Duke’s holdings fell under the control of the Hapsburg Empire who, in 1783, merged Montemerano and Manciano. From that moment on, the story of one town was linked to the story of the other.