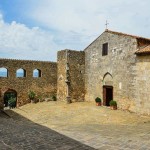 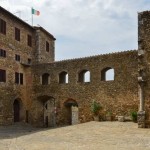 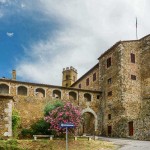 Church of San Giorgio is considered he most interesting monument of Montemerano for both its architecture and the works of art it contains. It was consecrated on October 30 1430, as stated in the plaque on the facade of the temple. The rite of consecration was very rare at that time and was reserved for cathedral cities; this underscores the importance of the sacred building and indeed the town of Montemerano. It is thought that the church was built between 1328 and 1382, the high point for the Baschi family in the region. Analyses reveal that the first basic plan of the church consisted of a double chamber, and that only later, perhaps in the 15th century, the plans assumed the classic form of a Latin cross. The church was built outside the walls and so in the 15th century it became necessary to extend them and incorporate the church, thus creating a new portal into the city. The real jewels of this church are the works of art which over the centuries have “layered” the building. Below is a brief overview of the most important.

-The altarpiece by Sano di Pietro is certainly among the most remarkable and was built specifically for Montemerano, evident by the presence of the patron saints San Giorgio and San Lorenzo. The panel was also signed by the author and dated (1458).

-Of particular beauty is the Virgin of the Annunciation known as the “Madonna della Gattaiola”, because of the hole made by a priest, who used it as a door. The painting dates from the mid-fifteenth century and was made by an anonymous painter from Montemerano: Nicolosi attributes the work to the “Sassetta School” while Brandi likens it to that of Giovanni di Paolo.

-From the same era, the ‘”Assunta”, attributed to Vecchietta, is made of carved and polychrome poplar wood. One of Vecchietta students is the creator of “San Pietro” carved in olive wood polychrome.

-Among the frescos the most impressive is the Ciclo di San Giorgio from 1491, which represents in detail the Golden Legend of the saint, but with landscapes and a background reminiscent of the coast and the Maremma countryside; it is dotted with olive groves, just like the environment would have been around Montemerano.

Numerous other works were commissioned in the following centuries: 16th century frescoes, 17th century altarpieces, 18th century stucco and altars. We’ll leave some of it to your imagination, and you will not be disappointed.