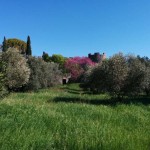 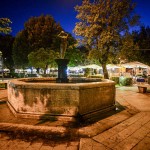 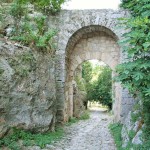 The town is located 14 Km from Manciano and stands on a travertine plateau at 294 m above sea level, to the left of the Albegna river. Thanks to its prime location in the Maremma countryside and the properties of its unique thermal waters, Saturnia is internationally known as a place of relaxation and peace to reconnect with nature. Once crossed by the Via Clodia, an ancient Roman road of Etruscan origin, the village and its countryside are still evocative of its glorious past: the square is a veritable open air museum, you can still walk a stretch of the Via Clodia, and the landscape is studded with ancient necropoli, often surrounded by olive groves and oak trees.
Historical Notes: If Dionysius of Halicarnassus is correct and Saturnia is the oldest city in Italy, the origins of the town date back to the Bronze Age and life would have continued apace into the Etruscan period, as evidenced by testimonials of the 4th century BC and the nearby necropolis. The oldest tombs date to the eighth century BC, but there is evidence of funerary structures from the 7th century BC and more from the 4th century BC. In Roman times the population followed the fate of Vulci, the ruling city, and was conquered by Urbe in 280 BC It was invaded by the Goths in 411 and then by the Lombards in 570. The town was then passed to the Aldobrandeschi, who also owned the thermal springs, where the Countess Margaret Aldobrandeshi used to bathe. Later it was a contested land between Siena and Orvieto, then fell under the rule of the Baschi of Montemerano and later the Orsini, until the conquest of Siena in 1410. In 1593 the ruling Medici family passed Saturnia to the Marquis Ximenes as a feudal holding. In the 18th Tuscany, and thus the whole Maremma fell under the control of Lorraine until the Unification of Italy.