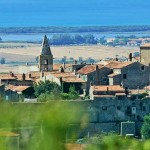 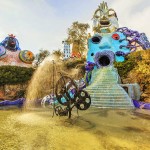 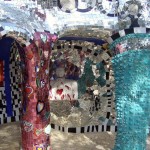 Surrounded by hills and lush sea scrub, Capalbio is a small village surrounded by ancient walls with splendid views of the sea a few kilometers away and the surrounding countryside. In 805 Charlemagne donated the village to the Abbazia delle Tre Fontane; as in many other villages in the area, the domain passed through the Aldobrandeschi, Orvieto, and Orsini dynasties and finally to the Republic of Siena. The fortress, whose building had begun under the Aldobrandeschi, was finished under the Sienese. It later became a principality along with Orbetello, Porto Ercole and Porto Santo Stefano, and then finally to the Medici family. Do not miss a visit through the old town and walk along the double trench walls still surrounding the historic center. In addition, be sure to catch franco-american artist Niky de Saint-Phalle’s “Nana fontaine”, a contemporary art exhibit curated by architect Roberto Aureli.

The Tarot Garden is an arts and sculpture park created by the Franco-American Niki de Saint-Phalle. Perched on a hill facing the sea is a thick forest full of sculptures based on the artist’s reinterpretation of the tarot cards. The project was born in the 70s and ended with the death of Saint-Phalle, but it remains a very special and magical place to visit.