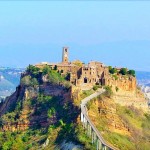 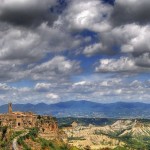 The village, inhabited now only by a dozen inhabitants, is situated on a hill and is only accessible via a pedestrian bridge built in 1965, the only one of its kind. Founded by the Etruscans, who designed the layout of the city more than 2500 years ago, Civita is located on one of the oldest paths in Italy, where the Tiber River meets Lake Bolsena. The Etruscans were faced with the dilemma of landslides which plagued the area, and built canals and levees to secure their settlements,  work that was continued by the Romans. The small town is also full of medieval and Renaissance architectural treasures.