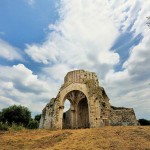 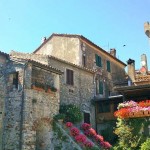 The Magliano area was already populated during the Etruscan era and the surrounding areas are rich in necropoli. Indeed this is the site of the Magliano Disc, one of the largest and most important records of the Etruscan language, in fact, containing ritual rites to be performed in honor of various deities.

Today the Disc is preserved in Florence, but you can spend a lovely day in Magliano visiting the many monuments and medieval churches. Like many other towns in the area Magliano, as Manciano was under the dominion of the Aldobrandeschi. Do not miss the 15th century Palazzo del Podesta and the Palazzo di Checco il Bello, done in late medieval Gothic style.

The Etruscan town of Ghiaccio Forte was built in the 4th century BC and destroyed by the Romans in 280 BC. The walls of the city are still visible as well as one of the city gates and the foundations of several buildings. Artifacts from this settlement are on display at the Scansano Archaeological Museum.

This small village was built by the Aldobrandeschi in the tenth century, but based on archaeological remains found in the area, both the Etruscans and the Romans had passed through the area.

The village is surrounded by ancient walls whose layered construction spans different historical periods. The embattled Porta di Ponente is a late medieval gate that leads into the city. Also visit the small churches: Church of Santa Maria Assunta, the Church of San Giovanni Batista and the Chapel of San Giuseppe.

In the countryside a few kilometers from Magliano visitors will find what remains of the Monastery of San Bruzio. Built by Benedictine monks in 1000, there is an apse, two parts of the transept with half-columns and decorated capitals, as well as traces of the dome. A must see, the site is one of the most fascinating and evocative in the area.