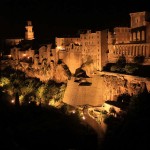 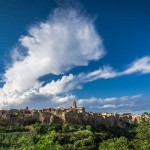 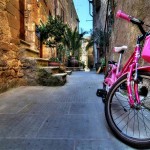 Pitigliano As soon as you’re on the curved road snaking around country bends, you’ll understand why to visit Pitigliano. With its fairy tale charm and spectacular scenery, the town welcomes visitors by immersing them in history and intoxicating them with aromas and flavors. Pitigliano is known around the world as “Little Jerusalem”, the history of the city is intertwined with the Jewish religion. The medieval village is situated on a half moon shaped tufa peninsula and surrounded on three sides by green valleys that have historically acted as a natural defense against enemy attacks. The village is entirely built on a spur and its historic center is developed along three main streets which intersect with numerous picturesque lanes, often opening up to beautiful views.

Pitigliano has ancient origins: archaeological finds date back to the Middle Bronze Age (16th century BC), and it was a flourishing settlement in the Etruscan era. The name of the town likely came from “Gens Petilia”  whose existence was recorded by Roman authorities beginning in 385 BC. During the medieval period, large swathes of the Etruscan period were mostly lost and the tombs nearest to town were reused as cellars. In 1200 the city belonged to the county of Sovana, where the Aldobrandeschi has since the 8th century imposed their rule. From the middle of the century it became the capital and after marriage of Anastasia Aldobrandeschi to Roman Count Orsini, the city passed to the Orsini and became their residence. The most important figure in this period was Niccolo III; through his efforts the county underwent and important recovery. Later, Pitigliano passed to the Medici family and the Lorraine before becoming part of the Grand Duke of Tuscany.

Manzi Museum Manzi Archaeological open air museum is an archaeological park with a nature trail; inside the park are reproductions of a late Bronze Age hut, a house and an Etruscan tomb belonging to married couple, complete with their wardrobe finery. Entering the cave road leads to the Etruscan necropolis of Gradone with graves of one, two and three bedrooms; the site was used for roughly a century and a half (7th -6th century BC) and significant finds of both local pottery as well as Greek imports and inscriptions have been collected.

Madonna delle Grazie The Sanctuary of Madonna delle Grazie is in front of the “scogliaccio Pitiglianese” on a slight hill from which you can admire the beauty of Pitigliano; particularly at dusk, the village appears to be suspended in nothingness. The church has late medieval origins and began as a rural chapel, becoming a shrine to the Virgin Mary in the 16th century and housing a Franciscan community until the second half of the 16th century.

Cimitero ebraico The Jewish cemetery was built on a small tufa plateau donated by Count Niccolò IV Orsini to his trusted doctor David De Pomis, to allow the burial of the doctor’s wife. It later became an established burial ground, giving the Jewish Community of Pitigliano a place their loved ones to find eternal rest.

Acquedotto Mediceo This impressive aqueduct was built in the mid 16th century by the Medicis to bring water from neighboring streams to the city of Pitigliano. However, the work was not completed until in the eighteenth century when Pitigliano, under the Grand Ducal Government of Lorraine, underwent a municipal reconstruction. Even today you can walk along the aqueduct, divided into two large arches supported by massive pillars and thirteen arches, which allows the structure to extend to finish in a picturesque fountain that adorns the Piazza della Repubblica.

Castello Orsini The majestic palace in the heart of Pitigliano was built by the Aldobrandeschi origins and then rebuilt in the mid-16th century by Antonio da Sangallo il Giovane, according to the Orsini family’s wishes. The building became a welcoming residence for the Orsini counts. Today it is home to the Diocesan Museum and the Archaeological Museum of Etruscan Civilization.

Etruscan Museum Established in 1995, the Museum contains an exhibition of mostly Etruscan artifacts dating back to the Archaic period (7th-6th century BC.) Collected during excavations at the necropolis of Poggio Buco and in the village of Pitigliano, the collection ranges from primitive pottery to large Bucchero vases decorated in bas-relief. There is also a warehouse-workshop with ceramics in restoration.

Cathedral Through Via Roma, a central street commonly named “via del Corso” you’ll arrive at Piazza Gregorio VII, which overlooks the Cathedral of Pitigliano dedicated to San Pietro and San Paolo. The harmonious and elegant tripartite façade with its sixteenth-century portal and two side niches containing the statues of the patron saints is not to be missed. The interior of basilica has a single nave. Upon entering the cathedral and stopping at the place of worship you can admire the beauty of the works from the Sienese territory such as the “San Michele Arcangelo che colpisce il demonio” f(1725) from Pitigliano’s Francesco Zuccarelli, “Madonna della Rosario” (1609) by Francesco Vanni and the two large canvases depicting scenes from the life of Pope Gregory VII (1885) by Manciano’s Pietro Aldi. The bell tower, rising into the air adjacent to the Cathedral, has a particular shape that gives the entire structure an interesting look. Adjacent to the left side of the Cathedral rises in the air that the Bell Tower, with its particular structure, gives it a ‘village interesting shape.

Church of San Rocco  The church of St. Rocco, patron saint of the city of Pitigliano, is likely the oldest church in the city. The first traces of this church date back to 1276, and it was restored to its former splendor in 1500 by the Orsini family.

Mure Etrusche Remains of Etruscan walls are still visible near the Porta di Sovana, the only strip of land where the city of Pitigliano needed a fortified wall. The lower part of the walls are of clear Etruscan origins and are made of large blocks of tufa stone. Much of the city wall has disappeared due to erosion of the tufa, making it difficult to identify other fortified stretches.

Synagogue and ghetto Pitigliano was a haven for Jews since the end of the 13th century and as time went by and thanks to favorable conditions and good relations with the Christian citizenship, a thriving Jewish community was born. The native culture of the city continues to be enriched by this co-habitation. Head out on via Zuccarelli to reach the Synagogue, built in 1598 (5358 on the Hebrew calendar) by the first Jews who arrived in Pitigliano.The bombings of the Second World War severely damaged the building until its partial collapse in the late 1950’s. Recently renovated, the Synagogue occasionally hosts functions and religious ceremonies and is an important destination for visitors from all over the world. Underneath the Jewish Temple you can visit he ancient Ghetto, entirely dug out of the tufa cliff face, where the tasks that filled the daily life of the Jewish Community were performed.