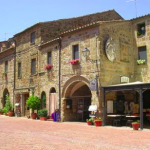 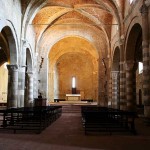 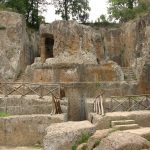 This small town has a reputation as one of the most beautiful villages in the Maremma, and it is well earned. Built on a plateau, the medieval appearance of the village appears intact, and walking through town one has the sense that time has literally stopped moving. The first traces of human settlement date back to the Bronze Age, though the area was then abandoned and reoccupied at the end of the 7th century BC. The most important development in the city however came after the Roman conquest in the 3rd century BC, and both Etruscan and Roman remains extend over a large area around Sovana and include monuments, kiosks, and decorated tombs. Sovana fell under Byzantine rule until the end of the sixth century, later passing to the Lombards; the village was built in medieval times under the Aldobrandeschi. Following the marriage of Romano Orsini to Anastasia Aldobrandeschi the village passed into Orsini hands and in 1440 it was conquered by Siena, only to be retaken by the Orsini in 1552. Very soon after however, it became part of the Grand Duchy of Tuscany.

Museum of San Mamiliano The Museum of San Mamiliano are the custodians of the “Sovana Gold”, a collection of 498 solid gold coins found inside the Church of San Mamiliano in 2004. The coins, found more than two meters below the current floor level, date to a period between 420 and 550 AD. The museum also displays objects found in the shrines at the entrance to the cave road, called Il Cavone: to date there are twenty ceramic artifacts that depict human body parts such as hands and feet, as well as male and female puppets.

Rocca Aldobrandesca Built by the Aldobrandeschi in approximately 1000 AD, this fortress was the most heavily armed in the region. After centuries of damage accumulated on the fortress it was restored by both the Sienese and the Medici. With the annexation of all castles to the Grand Duchy of Tuscany, the fortress lost its military importance and began its slow decline.

Palazzo Vescovile Constructed in the late medieval period and later restored, the episcopal palace was the residence of the Bishops of Sovana until the transfer of the diocese to Pitigliano. Today the palazzo houses the rectory of the Cathedral of Sovana.

Duomo di Sovana Next to the Palazzo Vescovile, the Duomo was constructed outside of the village shortly after 1000 AD and remains one of the most important monuments to the Gothic style of Tuscany.

The gate on the left side of the church was made of fragments from the first façade and dates to the 11th-12th century; the interior had vaulted ceilings and is divided into three aisles by two-tone columns. The 8th century crypt houses some the bones of San Mamiliano, the patron Saint of Sovana; his ashes are kept in an urn, located on the right side of the church. The cathedral also houses a Renaissance era baptismal font, a fountain, traces of frescoes and some noteworthy paintings.
Citta del Tufo Archaeological Park The beautiful trails of the Park lead through dense Mediterranean vegetation and are designed to help preserve the famous Etruscan tombs located therein: there are the front columned Tomba di Pola and Tomba di Ildebranda, the niche tombs of Tifone, Demoni Alati and Sirena as well as tombs with varying degrees of decoration. Visitors to the park can also walk through numerous cave roads that crisscross the area, taking the winding roads through mystical trails full of enchanting scenery. Manciano- Sovana: 18 km