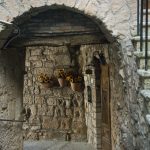 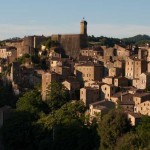 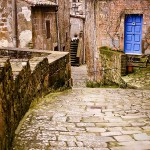 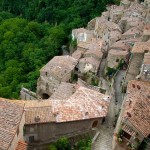 Sorano Perched on a volcanic outcrop, the old town of Sorano is divided internally into alleys, loggias and cellars, with ascents and descents that contribute to the graceful look of the city. The old town is also characterized by the beauty and peculiarity of Soarno cellars, completely dug out of tufa, which were actively used during all stages of the harvest throughout history. Inhabited since the age of the late bronze age (11th-10th century BC), there are several reports of Etruscan tomb clusters scattered around the area. In the 13th century Sorano became a possession of the Aldobrandeschi family, then later a division of the county.  The town was annexed to Sovana and finally incorporated into Pitigliano when it was inherited by the Orsini family. In the early 1600s the village of Sorano was officially annexed to the Grand Duchy of Tuscany under the Medici family. Sorano also has an old Ghetto and Synagogue, evidence of a Jewish community that lived in the town until the early years of the 20th century. A visit to Sorano is a retracing of centuries of history through impressive monuments and culture, and its perfect mix for those who want to relax in an authentic and unspoiled nature without sacrificing historical and cultural beauty.

Fortezza Orsini This imposing fortified complex overlooksthe entire village of Sorano. Of Aldobrandeschi origins, it was enlarged by the Orsini family in the mid-16th century. The entrance to the Fortress consists of the tower within which a system of tunnels were dug, once used as a defensive moat. The gate is crowned by the coat of arms of both the House of Aldobrandeschi and the Orsini family.

The Medieval Museum resides in the oldest part of the fortress; the Tourist Reception Center for the Tufa Archaeological Park is located in the Keep.

Masso Leopoldino and clock tower on the opposite side of the Orsini Fortress rises the defensive outpost of Masso Leopoldino,  built before the fortress and restored in the nineteenth century by the Lorraines. The clock tower is actually built into the Masso (rock): its square base and battlement features on its summit frame the large clock that gives the tower its name.

Porta di Sopra One of the gates leading to the town of Sorano, to pass through the ‘upper door’ you first cross a loggia square, which then leads you into the heart of the old center. Via Selvi is the main artery of the quarter, where visitors will find most of the shops in town.

Porta di Merli marking the end of the old town, continuing past ‘blackbird gate’ leads to the Lente river.  The door has a stone frame and is topped by a coat of arms; make sure to look for the slits on either side of the door, for this is where the drawbridge would have been fixed.

Necropoli di San Rocco This small dwelling is perched on an outcrop of native tufa stone, in the San Rocco area. Though difficult to date and accurately catalogue, this settlement is proof of the continuous passage of human civilization through the area. Of particular note is the church of San Rocco, probably dating from the 17th century.[/vc_column_text][/vc_column][/vc_row]